Why Prescription Medications Are So Expensive

In last week’s blog, I discussed how patients can take back control of their medication costs. I suggested seven simple ways to reduce the costs of your prescription drugs.

Taking steps as an individual to hold down prescription costs, however, will only go so far. The core issue is that prescription medications in the United States are some of the highest in the world on a per capita basis. The same medications in other countries are less expensive than in the States, and US citizens spend almost two-and-a-half times (on average) what people in other nations spend on medications. 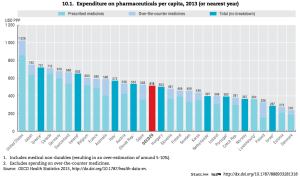 New treatment options often cost between $100,000 and $300,000 per year. Even older medications are not immune to what some call “outrageous” price increases. The cost of insulin tripled in the decade between 2002 and 2013. The four-decade old EpiPen, a lifesaving treatment for severe allergic reactions, experienced a staggering 500% price hike since 2007.

The American public and many politicians are asking the simple question, “Why?” The simple answer is because there is nothing stopping “big pharma companies” from charging these exorbitant prices. The better answer, however, is much more complex.

In this nation’s free market system, when demand is high for a product, companies often raise prices. That’s the case with prescription drugs. Millions of Americans suffer from high cholesterol, high blood pressure, diabetes and other lifelong diseases. Demand is high for medications that treat these diseases. Therefore, their pricing is ripe for periodic increases as demand rises.

The supply and costs of new medications are controlled entirely by the drug manufacturer that holds the patent rights. That’s a 20-year monopoly on a new drug before that medication could be offered as a less expensive generic version (competition). In that 20-year period, drug makers are free to increase prices as often and by as much as the market will bear.

I’m not saying that drug manufacturers should not make profits from newly developed drugs. That’s the basis of our capitalistic society and free market enterprise. If drug prices were highly controlled, new drug development would stall and the potential for new lifesaving medications would come to a halt.

Certainly, the US government could step in to regulate medication pricing and even take over all research for new drug development, but that runs counter to the ideals of our founding fathers—and that’s a discussion I’d rather not have in this blog.

The question is, “What is a middle-ground solution to the high cost of drugs?” Other industrialized, democratic nations seem to have developed systems that result in more affordable prescription drugs.

Possible solutions that other first-world nations successfully have adopted include:

Allowing More Drug Imports: The costs of brand-name drugs are typically much higher in the United States than in other developed nations. A system of importation that assures safe and legal procurement of less expensive medications could put pressure on manufacturers to hold price increases to more reasonable levels in this country.

Creating Better Transparency Regarding Drug Pricing: Presently, there is no mechanism to verify a drug manufacturer’s claim that higher prices are linked to costs associated with research and development. Often, higher costs are the result of extensive advertising of a drug’s benefits to the public and healthcare professionals.

Providing Easier Drug Comparisons: The public, and often even medical professionals, have little means of determining whether a newly-approved drug is more effective than existing treatments. There is a potential for tremendous savings on unnecessary duplications that do not exceed the effectiveness of present medications.

Implementing “Value-Based” Pricing: This is an extension of the above idea of more effective drug comparison research. Shifting the United States to a system in which drug pricing is based on how well the drug works (the value) rather than what the market will bear could make a real difference in what a drug costs. An example is a new drug that cures a disease. It would have more value and therefore be priced higher than a drug that doesn’t substantially improve on existing treatments.

universal definition of a drug’s value, other than a drug that stands alone as the ONLY effective cure for a disease. Another possible added value for a new drug is disease control or a cure without drug interactions or side effects.

The suggestions for controlling medication costs are numerous, albeit all with arguable faults, but the solutions may well be a composite of all the above to come up with a reasonable, workable plan.

With experience in both pharmaceutical manufacturing and clinical patient management, medications and their impact on one’s quality of life have been my expertise. My secret passion of murder and mayhem, however, is a whole other matter. I’ve always loved reading murder mysteries and thrillers, and longed to weave such tales of my own. Drawing on my clinical expertise as a pharmacist and my infatuation with the lethal effects of drugs, my tales of murder, mayhem and medicine will have you looking over your shoulder and suspicious of anything in your medicine cabinet.
View all posts by James J. Murray, Fiction Writer →
This entry was posted in About Medications/Pharmacy, Affordable Prescription Drugs, Blog Writers, Blogging, Controlling Drug Costs, Increasing Costs of US Pharmaceuticals, James J. Murray Blog, Making Medications Affordable, Medication Cost Increases, Medication Safety Issues, New Blog, New Drug Discoveries, New Drug Manufacturing Methods, New Drug Research, Pharmacy/Pharmaceuticals, Prescription Drug Safety, Prescription For Murder Blog, Solutions To The High Cost of Drugs, The High Cost Of Medications in the US, The Pharmacy Profession, US Prescription Costs Per Capita and tagged Blogging, blogging about drugs, Ever Increasing Drug Costs, generic drug use, James J. Murray - Fiction Writer, Lowering Your Monthly Prescription Bill, Medication Patents, Murder Mayhem and Medicine, murder mystery writer, new blog, Paying For The High Cost of Drugs, pharmacist writer, Prescription For Murder Blog, Prescription Use in The US, Reducing Medication Costs, Things That Can Be Done To Lower Prescription Costs, Ways To Cut Your Monthly Prescription Costs, Working To Cut The High Cost of Drugs, writing pharmacist. Bookmark the permalink.

2 Responses to Why Prescription Medications Are So Expensive