Before the 2000’s, the world feared WMD (weapons of mass destruction) that involved

nuclear technology. The threat of nuclear war, whether accidental or intentional, shaped how the military, our diplomates and alliance nations acted to protect its people and to prevent the mutual destruction of the world with a nuclear clash of superpowers.

In this century, biological weapons (although in limited use since WWI) became the new WMD with threats from Iraq and more recently Syria. World leaders scrambled to develop antidotes and anti-toxins to some of the most significant and most lethal biologicals that could somehow make it into the hands of terrorists to destroy large segments of the civilized world.

A few months ago, I wrote a blog about how as much as 80% of our prescription medications are imported from India and China, with a significant percentage of the active ingredients coming from China. I mentioned that the current trade wars could create a situation where prescription medications for US citizens would likely become more expensive with rising tariffs. 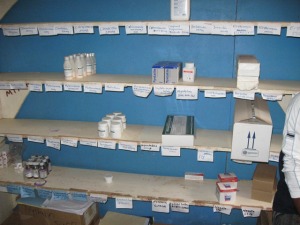 Recent news articles (Here and Here) indicate that the evolution of the United States outsourcing so much drug manufacturing to other nations over the years not only brings the possibility of price increases, but it also could create a very real crisis of prescription medication shortages if our prescription drug supply were to be held hostage as a negotiating tactic.

Just imagine if our supplies of life-saving antibiotics , for instance, (many of which are generic drugs made in Chinese manufacturing plants) were suddenly cut off. Some antibiotic products are certainly made in the United States, but a little known fact is that the last penicillin factory in the United States closed in 2004 and that manufacturing process was outsourced overseas.

China is the world’s largest exporter of vitamins and other antibiotic raw material in the modern world. China also is a key manufacturer of the active ingredients in blood pressure medications and prescription drugs for Alzheimer’s, Parkinson’s, epilepsy and depression.

industry. Retired Brig. Gen. John Adams told NBC News, “Basically, we’ve outsourced our entire (drug) industry to China. That is a strategic vulnerability.” Essentially, Western nations have handed an aggressive foreign government the power to hold all the cards for 21st Century WMDs over our collective heads, with the United States in a unique position to be the most vulnerable with the current trade war instabilities between the US and China.

With experience in both pharmaceutical manufacturing and clinical patient management, medications and their impact on one’s quality of life have been my expertise. My secret passion of murder and mayhem, however, is a whole other matter. I’ve always loved reading murder mysteries and thrillers, and longed to weave such tales of my own. Drawing on my clinical expertise as a pharmacist and my infatuation with the lethal effects of drugs, my tales of murder, mayhem and medicine will have you looking over your shoulder and suspicious of anything in your medicine cabinet.
View all posts by James J. Murray, Fiction Writer →
This entry was posted in About James J. Murray, About Medications/Pharmacy, Affordable Prescription Drugs, Biological Weapons, Bioterrorism, Blog Writers, Blogging, Chemotherapy Supply Shortage Issues, Chinese Drug Industry, Chinese Prescription Drug Exports, Controlling Drug Costs, Developing Story Arcs, Developing Story Plots, Developing Storyline Ideas, Drug Distribution Chain, Drug Shortages in the US, Drugs and Terrorism, FDA and Drug Supply Shortages, Generic Drug Manufacturing, Generic Drug Safety, Generic Drugs in the US, Increasing Costs of US Pharmaceuticals, International Supply of Drugs, James J. Murray Blog, Made In America, Medication Cost Increases, Medication Safety Issues, Medication Shortages in the US, Modern Weapons of Mass Destruction, Murder Mayhem and Medicine, New Blog, Pharmaceutical Shortages in the US, Pharmacy/Pharmaceuticals, Prescription Drug Safety, Prescription Drug Shortages, Prescription For Murder Blog, Prescription Trends, Shortages in the US Drug Distribution Chain, The American Drug Supply, The High Cost Of Medications in the US, The Price of Freedom, Trade War Instabilities, Trade Wars, Trade Wars and Pharmaceuticals, Where Are America's Prescription Drugs Made?, Where Are Our Drugs Made, WMD and tagged Antibiotic Drug Shortages, Antibiotics and Biowarfare, Biological Warfare Threats, Blogging, blogging about crime, blogging about drug crime, blogging about drugs, Chinese Drug Manufacturing Industry, Drugs and Trade Wars, James J. Murray - Fiction Writer, National Security Risks, new blog, Nuclear Threats, Outsourcing the Nation's Drug Manufacturing Industry, Outsourcing the Nation's Drug Supply Chain, pharmacist writer, Prescription Drug Imports, Prescription For Murder Blog, Terrorist Threats, Trade War Consequences, Where do our Prescription Drugs Come From, writing pharmacist. Bookmark the permalink.

3 Responses to A New 21st Century Weapon of Mass Destruction